Chennai: Colors Tamil, the meaningful entertainment channel is all primed up to bring the World Television Premiere of Clap this weekend, June 12th, Sunday. A treat for sports fanatics, the most anticipated movie of 2022, featuring Actor Aadhi Pinisetty and Actor Aakanksha Singh as the main protagonists. Traversing around the trials and tribulations of a sports athlete, tune into Colors Tamil to watch an endearing movie that proves hard work never fails, this Sunday, June 12th at 2 pm. 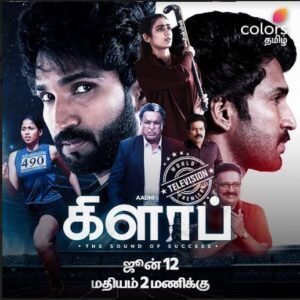 The plot narrates the life of a former national athlete, Kathir ( Actor Aadhi Pinisetty) who meets with a fatal accident and loses a limb, thereby shattering his dreams of winning the National Athletics Championship. Kathir’s relationship with his wife Mithra (Aakanksha Singh) suffers because of the tragedy and his post-traumatic stress, and he stops conversing with her. A turn of events changes his life after a state tournament, where he learns of a rural girl named Bhagyalakshmi (Krisha Kurup) and her sprinting potential. He approaches her and offers to help her prepare for the national championships.

After several coaches refuse to take her under their wing owing to power dynamics in the sport and an old animosity with an association authority, Venkatram (Nasser), Kathir himself, coaches the girl. Does the girl conquer all obstacles to win the national title and does the amputee ex-athlete achieve his ambition through his protégé forms the rest of the plot.

Commenting on the premiere, Director Prithvi Adithya said, “The idea with Clap was to deliver a sports drama in a non-linear fashion, thus the film has myriad of tropes from sport politics, power dynamics, to exploring the relationship between a husband and wife and that of a student and protégé. Aadhi has proved his mettle as a phenomenal actor where he brilliantly portrays the character fighting his inner battles and the rest of the cast has equally performed astoundingly well. I am confident that our efforts will appeal to the audiences watching the World Television Premiere of Clap, this weekend.”

Adding to this, Actor Aadhi Pinishetty said, “I am thrilled that Clap is having a World Television Premiere on a popular channel like Colors Tamil. I am sure that the audiences will truly appreciate the film this weekend like they did in the theatres. Kathir as a character has different shades and holds countless emotions, hence it is a distinct role altogether.”

With music maestro Ilaiyaraaja composing the background score, the film further finds an added asset making it an enjoyable watch for the audiences.

Forbes India felicitates the high-flyers in business, entrepreneurship & entertainment at its flagship event ‘Tycoons of Tomorrow 2022’

RBI Policy Review: Hikes by 50bps amidst a global storm