New Delhi: Shri Kiren Rijiju, Union Minister of Law and Justice inaugurated Kathakar 2022, the sole celebration of India’s rich oral storytelling tradition, on 25 November 2022, being held at Sunder Nursery, a heritage park in Delhi and at Central Vista, India Gate. This year Kathakar is partnering with the Ministry of Culture under Azadi ka Amrit Mahotsav. Actor and Powerhouse performer, Nawazuddin Siddiqui, and noted music composer and singer Mohit Chauhan were also part of the sessions and joined the lamp-lighting ceremony to inaugurate the event. Also present at the inauguration were dignitaries such as President ICCR, Dr. Vinay Sahasrabuddhe, and other storytellers from India and abroad.

Kathakar was started under the umbrella of Ghummakkad Narain Travelling Literature Festival in 2010 with an intent to revive the age-old tradition of oral storytelling in India. The National Capital has been a witness to a warm welcome of Storytellers from all across the globe over the years by audience of all ages.

Shri Kiren Rijiju, Union Minister of Law and Justice, during his address at the inauguration said, “I applaud the organisers of the Kathakar for providing a platform to storytellers from around the world. Our society has forgotten the importance of our storytelling tradition, so we need to encourage platforms like these. Our government will further contribute to Kathakar in the future”. 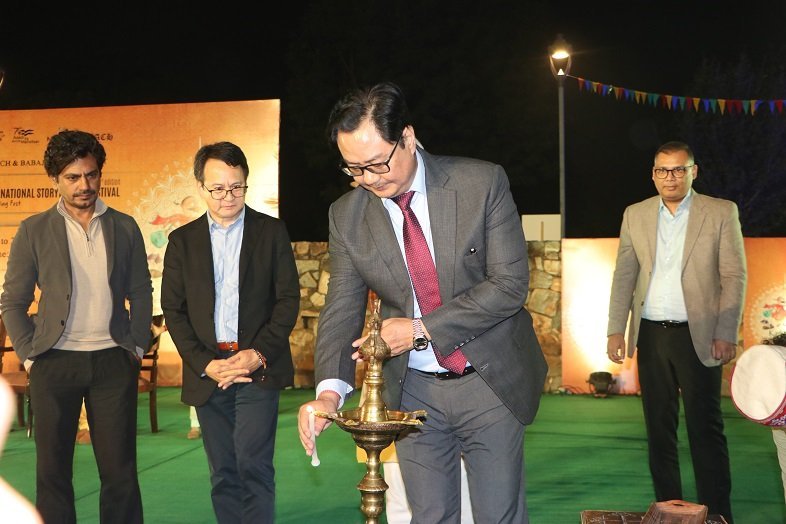 Mrs. Meenakshi Lekhi, Minister of State for External Affairs and Culture narrated the story of a brave freedom fighter Neera Arya at the Kathakar festival as India celebrates 75 years of Azadi ka Amrit Mahotsav. She said, women have played an equal role in fighting for the freedom of the country and many unsung stories need to be told. It is important to remember the sacrifices laid down by our ancestors.

Mohit Chauhan, narrated his story to stardom and many anecdotes associated to his journey from NSD Delhi, to Bollywood. He said that he is delighted that he could be part of Kathakar 2022 and appreciated the platform’s effort to bring back the age-old cultural tradition of storytelling. He thanked the organisers and said that audience present at the event are very fortunate to experience the best storytellers and performers from India and abroad. He thoroughly connected with the audience throughout the session and engaged them in open-ended conversation with aplomb.

Mohit Chauhan noted music composer, and singer who is also the patron of the festival said “The art of storytelling in India has many forms and utilises many mediums. Despite differences in settings, genres, or cultures, all stories ultimately aim to convey something universal. They serve both an educational and entertainment function for audiences”.

The four-day marquee started on 25th November and will conclude on November 28, 2022. The festival will showcase in its pristine physical form, amazing stories, and music by Indian and International storytellers from seven countries: the United Kingdom; Australia; Mongolia; Israel; Sierra Leonne; Korea; and India.

Kathakar 2022—a marquee event to revive the traditional style of storytelling in a world dominated by hi-tech gizmos and gadgets—will thus feature professional and passionate storytellers from the country and abroad who will showcase their mesmerising craft to underscore the fact that storytelling transcends all boundaries of language and culture.

Tete-a-tete with eminent translators of Hindi and Urdu literature