Chief Guest of the occasion was Hon’ble Vice President, Shri M. Venkaiah Naidu The Hon’ble Vice President of India, Shri M. Venkaiah Naidu is reported to have shared his views on these issues. The Hon’ble Vice President remarked upon the coincidence of the Platinum Jubilee celebrations of Hansraj College, the centenary celebrations of the University of Delhi, and the nationwide celebrations to mark Azadi ka Amrit Mahotsav. He emphasised the need to decolonize the Indian education system and argued that New Education Policy is a significant step in that direction. He urged students to cultivate their mental and physical health by drawing upon ancient Indian cultural wisdom. Lastly, he hoped that Hansraj College and the University of Delhi would continue national efforts to emerge as Vishwa Guru, with the inspiration of Mahatma Hansraj and Swami Dayananda Saraswati.

The august ceremony began with the lighting of the lamps by our distinguished guests. The ceremony was preceded by the unveiling of the newly established bust of Mahatma Hansraj by the Hon’ble Vice President. 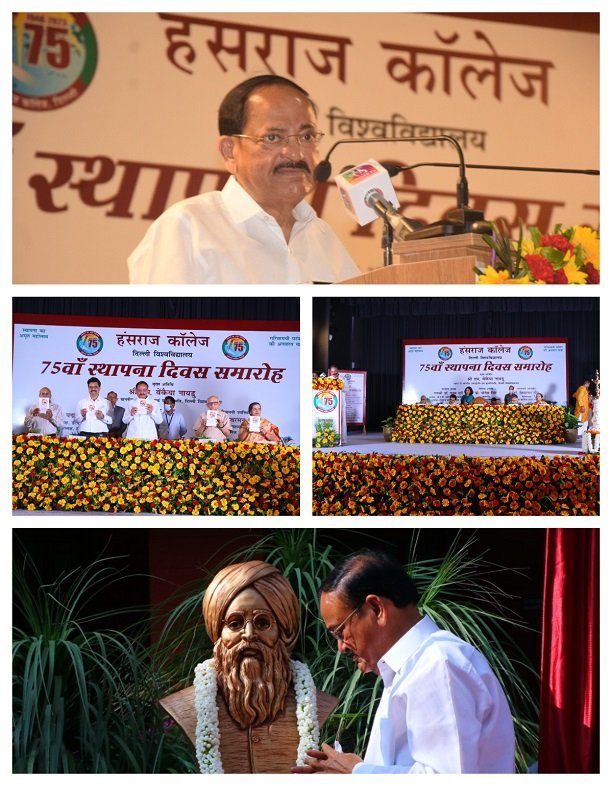 During the inauguration ceremony of the Amrit Mahotsav of the Hansraj College, the Principal of the college, Prof. Rama, welcomed the Hon’ble Vice President Shri M. Venkaiah Naidu, Prof. Yogesh Singh, Vice Chancellor, University of Delhi, Dr. A.K Sharma,Vice President,D.A.V Management, Dr. Shiv Raman Gaur, Treasurer, Hansraj College Governing Body, and other dignitaries with a brief account of the glorious traditions of the educational institution. She acknowledged the contributions of the faculty members, the non-teaching staff, and the students to the progress the college has made over the 75 years of its existence. The college Principal informed the assembly that significant efforts have been made in recent years to enhance the quality of academic instruction and the infrastructure in the college. She also proposed a number of plans for the future developmental initiatives to be undertaken by the college.

Prof. Yogesh Singh, the Vice Chancellor of the University of Delhi commended the college and its alumni and attributed their unparalleled success to the spirit of Mahatma Hansraj that animates each of their ventures. Remaking upon the coincidence of the centenary year celebrations at the University of Delhi and the Amrit Varsh celebrations at Hansraj College, he exhorted the college to join the ongoing efforts across the University to scale newer heights of academic excellence. Prof. Singh presented an overview of a host of positive measures- such as the introduction of the New Education Policy and a new academic structure- undertaken by the University in this regard. He also congratulated all the functionaries of the college on the Amrit Varsh of its Foundation Day.

Presiding over the ceremony, Dr. A.K Sharma, Vice President, DAV Managing Committee, informed the assembly that Mahatma Hansraj had played a leading role in the DAV Movement. Taking inspiration from Mahatma Hansraj, Hansraj College has made immense and continuous progress in the field of education. The only way to fulfil Mahatma Hansraj’s dreams is to nurture exceptional human beings and ensure that the youth of the country contribute to the development of this country.

At the end of the ceremony, the Treasurer of the College, Dr. Shiv Raman Gaur, thanked all the guests and eminent personalities who had participated in the ceremony. He stated that the magnificent opening of the Amrit Mahotsav of the Foundation of Hansraj College with the dignified presence and address of the Hon’ble Vice President was unprecedented. He thanked all the guests for gracing the august ceremony with their presence. He congratulated the Principal of the college, Dr. Rama, on the occasion of the Amrit Mahotsav of the Foundation of Hansraj College and for successfully organizing this magnificent inauguration ceremony. He also thanked all the teachers, non-teaching staff, members of the audience, and members of the Organizing Committee. The ceremony concluded with the National Anthem.