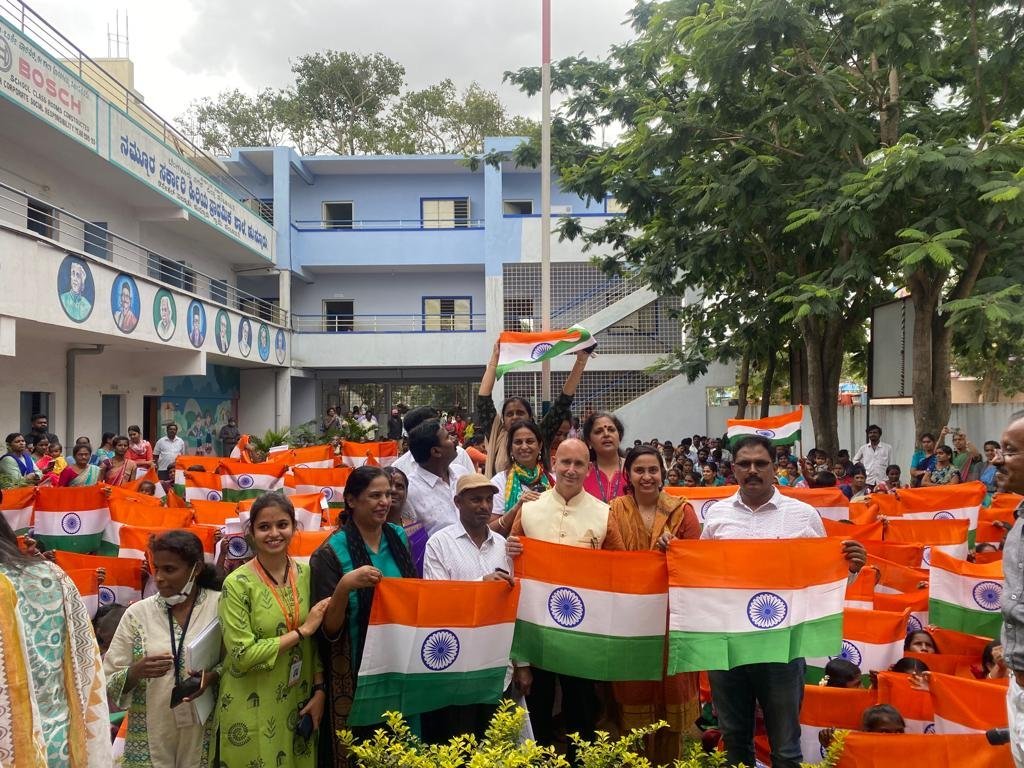 Bengaluru: The Biocon Group on Friday announced its support for the nationwide ‘Har Ghar Tiranga’ campaign through its CSR arm, Biocon Foundation, by distributing over 30,000 national flags amongst the communities living in the vicinity of its offices in and around Electronic City, Bangalore. Through this initiative Biocon Group of Companies including Biocon Limited, Biocon Biologics Limited and Syngene International Limited are participating in the ‘Azadi Ka Amrit Mahotsav’ of the Government of India to mark 75th year of India’s Independence.

Biocon Foundation, which is the principal channel for Biocon Group’s corporate philanthropy to build sustainable solutions that promote social and economic inclusion, distributed the Tricolor among members of the local communities, anganwadi workers, students and teachers in government schools in three Panchayats of Anekal taluk.

The flags were distributed by the Foundation among students from 60 schools, residents of 15 villages across locations in Electronic City, Huskur and Jigani Industrial areas in the neighbourhood of Biocon Group companies’ campuses, through Panchayats and Village representatives. Many employees of the three companies: Biocon, Biocon Biologics and Syngene are also participating in ‘Har Ghar Tiranga’ initiative and proudly displaying the national flag at their homes.

The Foundation, in collaboration with the panchayats of Huskur (7 villages), Hennagara (8 villages), and municipal bodies like Hebbagodi, organized several events to hand over the national flags for the communities, thus enabling everyone to participate in the nationwide ‘Har Ghar Tiranga’ Campaign and proudly display the Tricolor in their homes from August 13 to August 15, 2022 as part of the nationwide ‘75th Azadi Ka Mahotsav’. The Foundation has also provided the ‘Flag Code of India’ to the community member and urged them to comply with the code in letter & spirit.

Wishing every Indian on the occasion, Dr Kiran Mazumdar-Shaw, Managing Trustee of Biocon Foundation, said, “The 75th anniversary of India’s Independence is a proud milestone for a nation aspiring for global leadership. As we celebrate Azadi Ka Amrit Mahotsav, I believe the national flag best represents our flourishing democracy, our innovative and inclusive economy, and our ability to drive transformative change. Over the years, countless Indians including members of our armed forces have bravely and unquestioningly laid down their lives to keep the tricolour flying in its full glory. As proud citizens of Independent India, it is our duty to honour their sacrifices by making India the greatest nation in the world.

“This is the belief that made us bring communities together by being a part of the ‘Har Ghar Tiranga’ campaign of the Government of India. Taking this initiative forward, we are distributing thousands of flags among the local communities, schoolchildren as well as employees of the Biocon Group to inspire them to give their best for the greater glory of our nation.”

Hebbagodi CMC Commissioner Shwetha Bai, said, “We have worked with Biocon Foundation on several projects, including the rejuvenation of the Hebbagodi Lake. The rejuvenated lake now meets the needs of the people living in and around the lake. This initiative builds a sense of duty among the people towards preserving and conserving our country’s natural resources.”

Dr Anupama Narayan Shetty, Mission Director, Biocon Foundation, said, “Biocon Foundation is proud to be a part of the Har Ghar Tiranga campaign to mark India’s 75th Independence Day, and have distributed the national flag among households in Huskur, Hebbagodi, Hennagara and Yarandahalli to encourage the common man to proudly display the tricolour at home. We are happy that we are able to promote awareness about our national flag with the communities with whom we have been working over the years through various initiatives aimed at ensuring better healthcare and education, environmental management and ecological conservation.”

The Government of India recently announced the ‘Har Ghar Tiranga’ Campaign as a part of the Azadi ka Amrit Mahotsav, which celebrates the 75th anniversary of Independence Day. As part of this campaign, Prime Minister Narendra Modi has urged all Indians to fly the national flag at their homes between August 13 and August 15, 2022. To aid this, the government has authorized the use of polyester and equipment for flag production. The previous law permitted hand-spun and hand-woven flags constructed of khadi, cotton, wool, silk and bunting material.